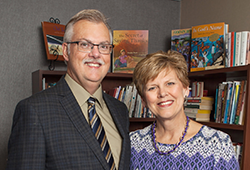 Tom and Cindy Hoy: securing the future of spiritual care at Sanford

"We want to make an impact," said Cindy Hoy with her husband, Tom. "That's just part of who we are. We want to influence and impact the world we live in."

Through their personal experiences at Sanford Health, their faith and Cindy's professional role as the Sanford Health Spiritual Care Services director, Tom and Cindy Hoy demonstrated a commitment to Sanford Health with a Legacy Gift.

"We feel like we want to do something to make a difference, and we want to do it with organizations that matter to us," she said.

The first time Sanford Health played a role in their lives, doctors saved Tom's life after a snowmobiling accident at the age of 14. He stayed on the orthopedic floor for 10 days and missed half of the school year recuperating at home.

"I have no doubt the fact that I spent some time here as a patient probably led me in some aspect of health care along the way," said Tom, who currently works as director of the Association of Christian Churches of South Dakota.

He was also influenced by his father, who worked as a medical malpractice lawyer and represented Sioux Valley Hospital and its doctors in almost every claim or lawsuit in the 1970s and 1980s.

But the second and more significant lifesaving experience for the Hoys occurred on Aug. 16, 2001. After a typical 12-hour work day as the Good Samaritan Village Campus administrator, Tom took an evening drive along a gravel road outside Sioux Falls. Upon approaching an intersection, another vehicle going 80 mph rammed into him.

"I'm upside-down in the vehicle, it's dusty and I'm hanging from a seatbelt," he said. "I can't breathe because I'm bleeding internally. I basically said, 'God, something terrible has happened to me and if this is the end, I've had a good life. But if you can help me put the pieces together, I'll continue to do good work for you.'"

Tom was flown via Sanford AirMed to Sanford Health with significant internal bleeding, severely bruised heart and lungs, fractured pelvis and a damaged spleen that was later removed.

"I was extremely lucky," he said. "I keep this beat-up picture of my vehicle in my wallet. I know that picture is pretty warn through, but it reminds me that if I was hit at a point another 1/8 of a second either way I might have escaped."

Each phase of Tom's recovery was difficult for him to understand and face.

"You come out of a cloud when you have an impact like that," Tom said. "It really messes up your body, your head and your mind. It was a time when I was little combative. I had tubes everywhere and I didn't want to be where I was at."

At the same time, Cindy was frightened for her husband's life. She heard the news on a voicemail message from a nurse while driving home from the middle of Nebraska.

"I was driving home alone in the middle of the night knowing he was in surgery," she said. "It was scarier than I could imagine. I was six hours from home and I'm tired and I'm drained and I'm worried."

Tom stayed in the intensive care unit for 10 days and another five days in the hospital followed by several weeks of therapy. Through the waves of hope and helplessness, they battled through and appreciated the emergency and trauma and intensive care medical teams' swift work, expertise and professionalism.

"There are staff that not only cared for him, but cared for me, and it's interesting now as I'm working here I see how important that is," Cindy said.

Beyond the medical team, every employee at Sanford played a role in his healing journey from the physician assistants, nurses in every department, social workers, staff in central supply and even building management employees.

"They have extremely important roles and every role is to be respected for their contributions they give," Tom said. "In fact, those roles that are the most task-oriented seem to be the least impressive and some of the most important work."

The experience influenced Cindy to accept the director of Spiritual Care Services position in 2003 and feel more confident in helping employees, patients and their families cope in tragedy.

"I know something about the roller coaster of the ICU," she said. "Your hopes go up and your hopes are dashed, day after day after day."

It also solidified their relationship with Sanford Health and they arranged a portion of their will to support Sanford Spiritual Care Services. Community leaders and Legacy Society members, like the Hoys, who establish Legacy Gifts are part of a select group of individuals with visionary goals and dedication to Sanford Health and its mission of health and healing for generations to come.

Tom and Cindy said they don't have liquid assets and can't make a significant gift today, but wanted to direct their property to organizations they respect instead of a public legal system distributing it after they die. They know their gift will make a difference through the Sanford Health Foundation and feel gratified knowing they'll be a part of the future of health care.

"We know that in the next 20 to 50 years things are going to drastically change with the way hospitals operate," Tom said. "We don't know what the future holds in health care, but we trust that there will be competent people that will manage it, look after it and utilize it in a way that will be done with stewardship and credibility."

Thank you to all our Legacy Society members for your amazing contribution to the future of health care in our community.

Learn more about leaving a legacy gift to the Sanford Health Foundation.